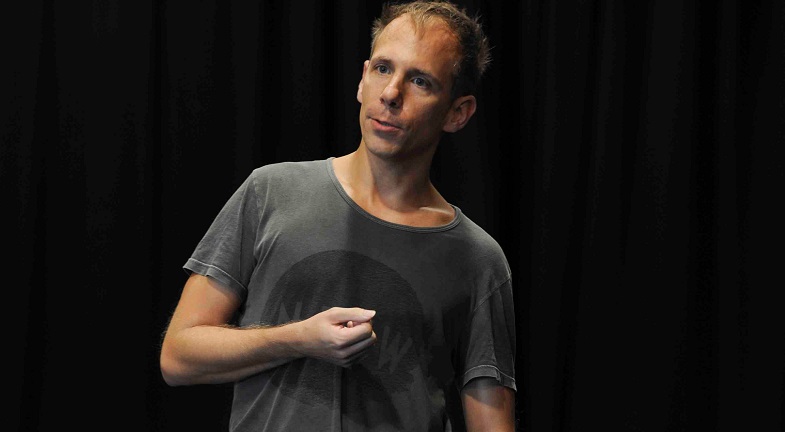 Critical Path & PYT Fairfield Lab – ‘Why Is This Contemporary?’

Critical Path in partnership with PYT Fairfield are delivering the second lab of their three-year project that explores contemporary dance practice in Western Sydney. This year’s ‘WHY IS THIS CONTEMPORARY?’ lab aims to make space for different dance and movement practices in our culture to share and work together.

The lab will host Anna Kuroda (dancer/choreographer), Eliam Royalness (hip-hop & vogue dancer), and Neda Taha (hip hop dancer), with facilitation from Martin del Amo (dancer/choreographer). The artists will spend two weeks examining and sharing their practices and consider how these practices sit in relation to wider contemporary art contexts, and the opportunities and restrictions of these frameworks.

Anna Kuroda is a dancer and choreographer from Japan based in Western Sydney. Her movement practice focuses on sensitivity to internal and external air flow around the body, sharpness, fragility and unique rhythm. She aspires to make work where, through focus and technical skill, the dancer’s body is, in a way, unseen; leaving cells and memories. She is a founding member of Murasaki Penguin with sound/multimedia artist David Kirkpatrick since 2010. Their most recent work, Subtle Downtempo No (2019), was performed by Raw Moves in Singapore. www.annakuroda.com

Eliam Royalness is a choreographer & performer from Sydney’s south-west and has been creating dance works since his teenage years. He originates from New Zealand and is a mix of European and Polynesian cultures, which has a strong influence in his purpose and direction. Equipped with the raw training & experiences in various street dance styles, combined with his calm character quality and respectful yet diverse take on dance, Eliam is a unique being with an interesting viewpoint on dance. Eliam is the creator and director of Australia’s number one Hip-Hop crew for 2019, The Pioneers  MC, who’ve represented Australia at Hip-Hop International in the U.S. He is also a leading figure of Australian Ballroom (Vogue) with the House of Sle (AUS) & the House of Oricci (USA). Eliam’s style is influenced by elements of various genres under the street dance umbrella. He’s trained in the foundations of Waacking, Old & New School Hip-Hop Grooves, Dancehall, and Vogue; and incorporates these foundations into his movement and choreography. Eliam’s inspiring drive and passion shows in his creations, personality, and his continued work through The Pioneers MC and his various ventures.

Neda Taha is an emerging Tongan Iraqi-Australian creative who hails from Western Sydney. She has most recently been working in the Helpmann Nominated ‘PLAYLIST’ which has had its second season at the Sydney Opera House as part of Festival UnWrapped 2019. She has also danced with the nationally recognised Pioneers Dance Crew (PNRS) since her first joining in 2013 and has seen an abundance of awards within their competing seasons as well as performances at numerous community events. She has also graduated a Cert. IV in music at EORA College. Neda hopes to eventually traverse into more fields of the performing arts to further develop herself as a creative.

Martin del Amo, originally from Germany, is a Sydney-based dancer and choreographer. He is best known for his full-length solos, fusing idiosyncratic movement and intimate storytelling. These include It’s a Jungle Out There (2009), Never Been This Far Away From Home (2007) and Under Attack (2005), all of which received significant critical acclaim. In recent years, Martin has extended his practice to choreographing group works and solos for others including Anatomy of an Afternoon (2012), Mountains Never Meet (2011) and various solos for his ongoing multi-part choreographic project, Slow Dances For Fast Times. Martin regularly teaches for a wide range of arts organisations and companies and has extensively worked as mentor and consultant on projects initiated by young and emerging artists. He also writes and regularly contributes to RealTime magazine. Martin has been nominated for two Australian Dance Awards – Outstanding Achievement in Independent Dance (2010) and Best Male Dancer (2005). His work has toured nationally and internationally (UK, Japan, Brazil). www.martindelamo.com

Images courtesy of the artists