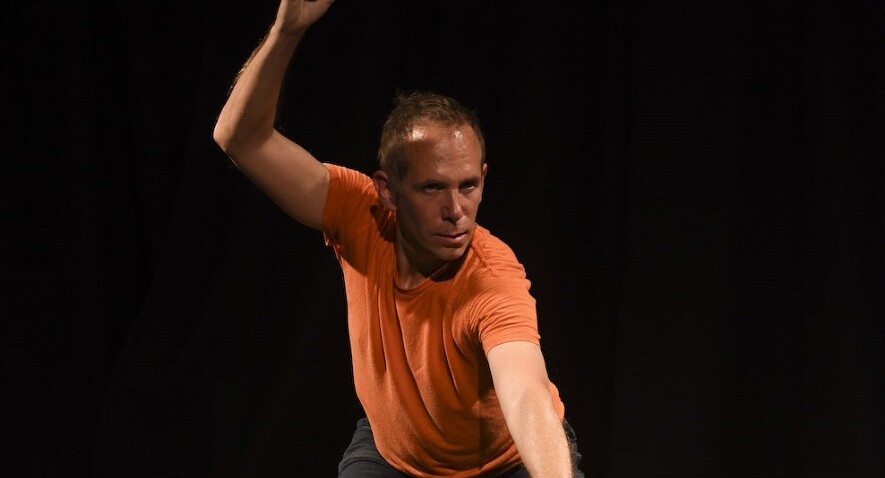 During my 2017 Dancing Sydney residency at Critical Path, I became interested in the idea of ‘physically archiving’ previous work. For this purpose, I revisited a 15-minute solo, A Severe Insult to the Body, which I had first performed in 1997. I then presented a reworked version of the piece as part of my end-of-residency sharing.

I created A Severe Insult to the Body over a 3-month period in 1997. Its staging – I performed the piece in underpants and high heels, lit by a single spotlight from above – was a nod to the Queer Cabaret aesthetic prevalent in contemporary performance circles at the time. Choreographically, it was the first time I employed a strategy I would later call ‘physical fragmentation’ – the body is divided into separate body zones, each of which is choreographed independently from each other.
In subsequent years A Severe Insult to the Body became somewhat of a signature piece of mine. I performed it in many different versions, in a variety of contexts, over a long period of time.

By the time I undertook my Dancing Sydney residency, I had not performed A Severe Insult to the Body for 5 years. It was a great challenge for me to reconnect with the physical rigour required to perform the work, given that my fitness and weight levels had changed over time. For the presentation at the end-of-residency sharing, I decided to ditch the original costume (high heels and underpants) and solely focus on trying to embody the choreographic ideas underpinning the piece.

At the time, I felt that the sharing was the ideal platform to revisit A severe Insult to the Body in front of an audience. It allowed me to frame the performance as part of an ongoing investigation into the possibilities and impossibilities to archive dance works rather than just present it as an exercise in mastering a personal challenge.

Response to the sharing

The audience at the sharing ranged from people who have been familiar with my work for more than twenty years and those who had never seen me perform before. I was impressed with how engaged people were during the discussion afterwards and appreciated the insightful questions and constructive feedback. The positive response to the sharing confirmed to me that it had been worthwhile to revisit A Severe Insult and present it within an archive framework. It not only marked the 20th anniversary of its creation but also added yet another version to its long performance history. Reflecting on the sharing now, three years on, I have the impression that it might have also been its final live performance.