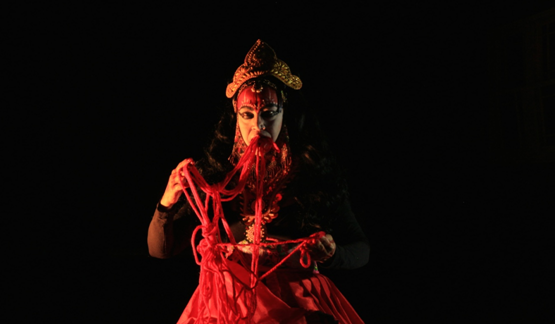 The Body as Archive

By employing the body as the receptacle of memory, choreographer and performance artist Rakini Devi will focus on key works that marked her journey in dance. The residency extends her concept of “tradition as transgression”, that has been a recurring theme in all her work, and explores the tensions between the sacred and the secular through what might be described as contemporary feminist intercultural performance. Devi’s research-led practice suggests that contemporary performance utilising hybrid religious female iconography as performance can transcend and subvert cultural significance to express and embody feminine identity. Her response to the lived experience of living between two cultures (Indian and Australian) has been to create a corporeal language that draws on various rituals and the symbolic, employing the stylized gesture so familiar to Indian dance towards a resolutely contemporary performance outcome.Her performance language is an ongoing dialogue and means of communicating with the society within which she creates work, in a country and culture not of her birth.

The “body as archive” residency will include a collaborative process with Karl Ford who will contribute video and sound design to the project. The outcome will be a short film, and written documentation of the residency.

Karl Ockelford is a multi-disciplinary artist who works individually and in collaboration across fields of film, sound, installation, photography, and visual design. His work explores improvisation, abstraction, and subterranean themes. His current practice involves sonic experimentations through his solo music project Reluctant Carnivore, personal studies of the interaction of sound/form through cymatics and investigations into forms of sound design and editing with in virtual reality/omni-cinema.