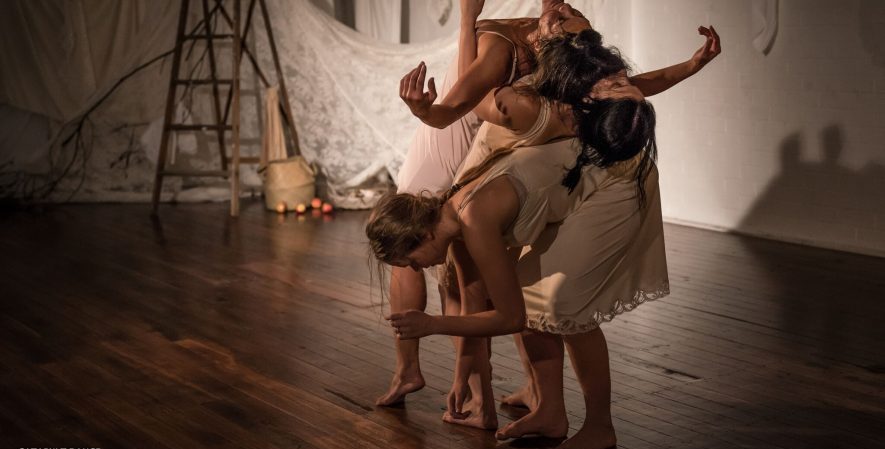 Following from their residency in April & May at Catapult’s Studio, artists Angeline Diaz, Alysha Fewster and Natasha Rogers will spend a week at the Drill Hall connecting with local artists and opening up dialogue around their current practice and new work Hysteria.

Hysteria was a project born from a collaboration between three different artists exploring the constraints and wildness of femininity, both perceived and raw. As women we take the opportunity to create a work that challenges and delves into contemporary and historical perceptions of female energy, and claim it as our own.

The artists will do a sharing of their research week on Friday 14 September, 6pm at the Drill Hall.

Critical Path and Catapult Dance are collaborating on a ‘studio exchange’ to facilitate the movement of artists between the two organisations and between metropolitan Sydney and regional Newcastle.

Later this year, a Sydney artist (tbc) will go on a residency at Catapult’s Studio in Newcastle. This project is a partnership between Catapult Dance and Critical Path.

Angelyn Diaz is a multidisciplinary Performer and Choreographer who has worked across Theatre, Dance, Film and Television. A graduate of WAAPA Dance with Honours, Angelyn’s practice as an artist swings between raw physicality and movement into creating nuanced emotional landscapes and characters. Angelyn has worked with Choreographers, Joshua Thomson, Craig Bary and Cadi Mc Carthy. Angelyn has performed with Legs on the Wall, Catapult Dance and Zeal Theatre. She is also a trainer in physical theatre at NAISDA.

Alysha Fewster is an interdisciplinary artist based in Newcastle, NSW.  With and emphasis on performance and installation, Fewster’s work explores relationships with and within place. Through her work Fewster hopes to offer a space for reflection and perhaps reframing of one’s own relationships with the people and places around them.

Natasha Rogers grew up in the Hunter Valley and took dance lessons at local studios from the age of 3. She was a part of the NSW Aboriginal Dance Youth Company which was in partnership with Bangarra Dance Theatre in 2012. While studying at NAISDA, Natasha took part in 4 productions at Carriageworks, Sydney.  In 2016 Natasha created 2 new works presented at Wyong Art House and Carriageworks and travelled to South Korea to dance in the Seoul Friendship fair to represent Aboriginal Dance. Since graduating NAISDA, Natasha is involved with some choreographic work and performances and teachs dance through schools.